Shortly after the event, Mr. Fulvio Zamponi, Monsummano’s mayor announced 314 dead persons, whilst monsignor Ugo Mori, Monsummano’s parish priest, announced over 500 and monsignor Renato Quiriconi, Cintolese’s priest over 100, an American committee of enquiry about 300 and Ponte Buggianese’s mayor, Mr. Aristide Benedetti, 800.
During 1945, the English enquiry went close to the real number, by announcing 184 victims including 8 people who had died before during massacres carried out in Ponte Buggianese. 1974 Riccardo Cardellicchio, after a very thorough enquiry, counted 175 dead persons, spread throuhout different villages, a number close to the 176 having been stated by the English.
2002 Enrico Bettazzi and Metello Bonanno compared Cardellicchio’s data, the ones of the English committee and the personal records, pointing out that the different names had been calculated twice, i.e. because of the nicknames or of the husbands’ surnames for women, while the others had been included just in one of the two lists. Particularly in Cardellicchio’s one [175 vittime] Livio Giannini was missing but there was the name of Gina Malucchi married Pierozzi, not existing in reality and Raffaello Lepori, called Settimo Lepori, had been counted twice. In Folin’s list [176 victims] Settimo Lepori, to be referred to Raffaello and Giuseppe Bini, not existing.

Marco Giori, employee at the town hall in Monsummano Terme, after careful investigation, confirmed the number and the names of the victims mentioned by Bettazzi and Bonanno: 174.

Vasco Ferretti in his book “1944-2011, Padule di Fucecchio. The massacre, the trial, the memory of a community”, on page 61 tells about 177 victims (174 + 3); the same theory was then taken again by Pier Vittorio Buffa in “I have seen”, page 327. It is a mistake easy to be demonstrated for an historian having read the death certificates. Ferretti, on the basis of the Public Prosecutor De Paolis’s closing speech, during the last trial, counts three more dead people in September (killed really either by sub-machine guns or bombs blown up during the last days of the German retreat), having nothing in common with the massacre in the Padule (Tristano Pinetini, Cesare Bottai e Gemma Dami). Their death certificate in town hall in Monsummano comes immediately after the ones of the people died during the massacre. The mistake was probably caused by following: the death certificates of the people died during the massacre were among the ones of the people who had died because of German raids or cannon firings. Therefore, we find in chronological order: people died either becaus of German raids or cannon firings, during the massacre died and the three ones died in September.

By examining the birth and death certificates in the town halls of Monsummano and Larciano (where the possible mistakes concentrated), I can confirm the number of the victims being 174. 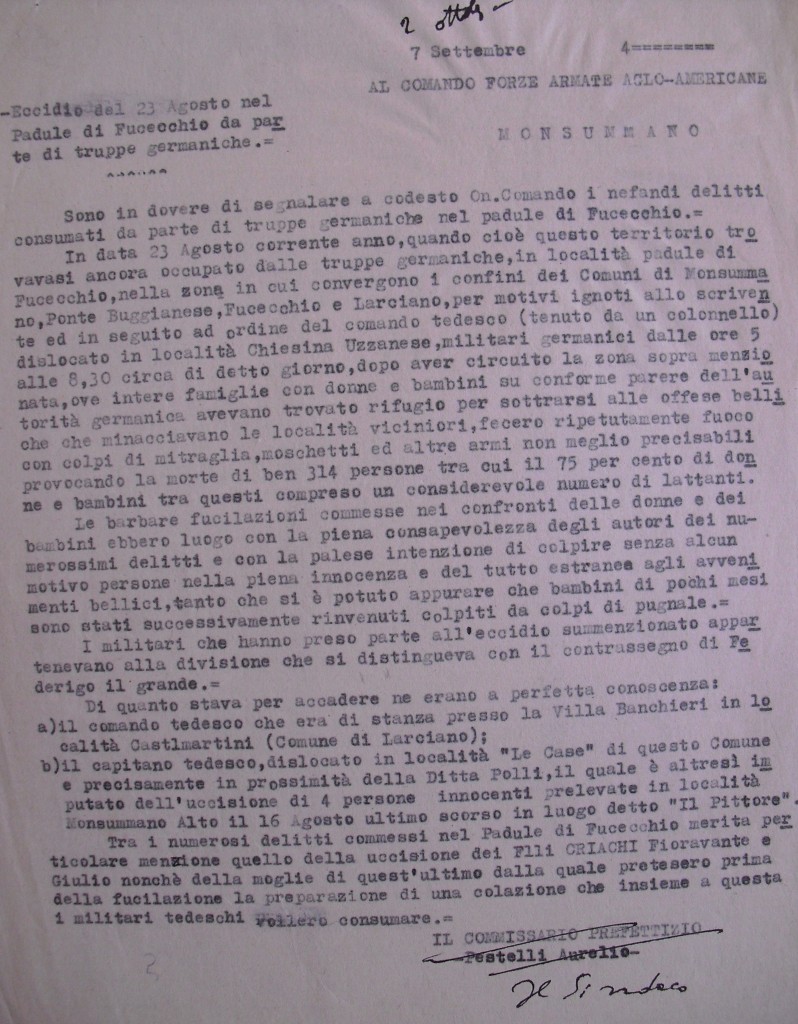 Document taken from the municipal archives of Monsummano